Throughout history, burial sites for the deceased served as more than a place to preserve memory and ground a legacy. In wake of honoring the dead, burial sites served as a basis for architects to exercise their craft and for the wealthy to boast their affluence. The magnitude of death invokes a necessity, like nothing else can, to commemorate someone. And it often takes the form of grand edifice. Simply, burial sites become a way for people to create memorable works of architecture. The burial sites listed come in a diverse range of size, purpose, and historical backstories, but all are heart-stopping to see.

In the 17th century, Paris’ cemeteries were stuffed to the surface with decomposing bodies. People complained of the rotting smell and demanded solutions. But it wasn’t until a season of rain that caused the collapse of a cemetery wall and consequently a sloppy spill-out of corpses into plain sight (and smell) that finally prompted Parisian municipality to address the issue. The answer was to place the bodies into the network of centuries-old limestone quarries beneath the city. Not open to the public until the 1860s, the winding 186 mile maze of tunnels holds over 6 million skeletons.

Also called the Church of Bones, the Sedlec Ossuary is an artistic approach to a bone repository. With nothing on the building’s exterior to denote its eerie insides, it sits beneath a medieval Catholic chapel in a small Czech suburb. After the church cemetery closed in the 15th century, the exhumed bones of 40,000 people who either died of the Black Plague or were casualties of the Hussite War were transferred to the church’s ossuary. In 1870, a František Rint used the bones to fashion a chandelier, garlands, small pyramids, a coat of arms, and more.

Mausoleum of the First Qin Emperor

Over 2 millenniums ago, Qin Shi Huang became the first person to unify China. Also the one behind the Great Wall of China, his burial site took 38 years and thousands of skilled and unskilled laborers to build; with the exact whereabouts of the emperor’s tomb still undiscovered. The most widely recognized feature of the mausoleum is the thousands of life-sized terracotta sculptures meant to protect the Emperor in his afterlife.

The 20 story, agate and jasper laden, pure-marble mausoleum lays evident to Mughal Emperor Shah Jahan’s inexhaustible wealth and dedication to his dead wife. Renowned as an unsurpassed architectural feat, the intricately geometric design of the palace-like tomb is mathematically flawless. This wonderfully eye-pleasing burial site took over two decades and tens of thousands of laborers to construct.

The Great Pyramid of Giza

The oldest and only intact Ancient Wonder of the World, the four and a half thousand year old burial site holds the mummy of Pharaoh Khufu. The 2.3 million limestone blocks that weigh in at two and half tons per block leave engineers and archaeologists dumbfounded as to how exactly the structure was put together. The most massive building in the world, Khufu’s Great Pyramid is the undisputed high point of ancient Egyptian architecture. 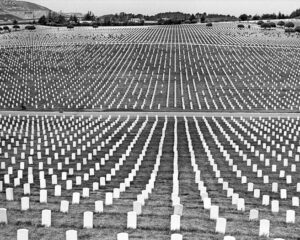